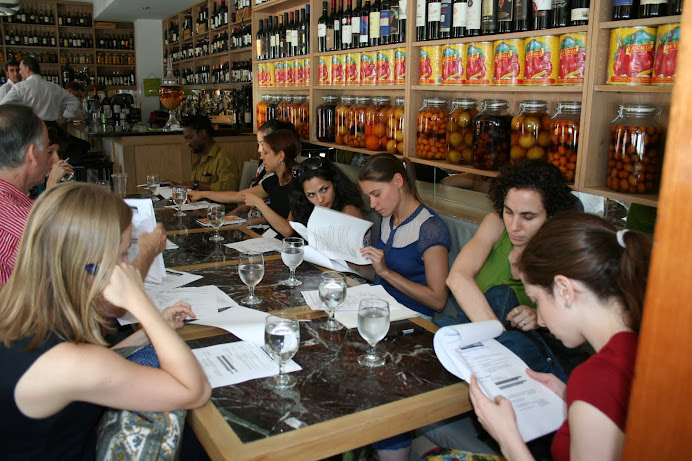 Jonathan Hollander, the dancers of Battery Dance Co. together with Edie Bachman, the American Consul for Political and Economic Affairs, Holger Backhaus-Maul, Sociology Professor at the Martin-Luther-University and Ingrid Häußler of Bürgerstiftung Halle (Citizen's Foundation of Halle) gathered for a press conference on the Dancing to Connect program.
The Frankesche Stiftungen Building has been on the German proposal list as a UNESCO World Heritage Site since 1999. Today, some of the historical buildings are almost completely restored and the ensemble has been revived as cultural and scientific, social and educational institution.

Battery Dance Company worked and performed here as a part of Dancing to Connect in Germany 2010.

Battery Dance transformed its Dancing to Connect methodology to address the humanitarian issue of refugee integration across the German nation during a one-month program from September 25 - October 26, 2016. This was the first year in a three-year sequence of programming that will ultimately provide intensive training for 1,000 students in as many as 60 schools.

Each workshop follows the parameters Battery Dance employs in all of its Dancing to Connect programs: +/- 20 students, ages 14 and up, comprise each workshop; 20 hours of workshop time is spent in the creation of an original dance work in which the participants generate movement sequences that are shaped by BD teaching artists into finished works of choreography which the participants perform on a large stage with fully professional theatrical conditions alongside performances by Battery Dance from its repertoire.

The unique element of this initiative is in the composition of each workshop group – a mixture of refugees, some of whom are unaccompanied minors, with their German counterparts. Changes were observed in each workshop – German students began to cross the chasm that separates them from refugees, refugees became more at ease in expressing themselves physically and verbally, stories were shared and empathy increased. By the performance day, groups were cheering each other, participants from different backgrounds formed an indivisible ensemble, pride was overflowing. Refugees from conflict zones in Syria, Afghanistan, Eritrea, Ethiopia, Somalia and elsewhere had made their way to Germany in harrowing conditions, escaping from unimaginable devastation. Seeing them free themselves, at least temporarily, from the grip of their nightmarish past, and their hankering for their families and friends back home, was tremendously moving.

In Frankfurt, five senior students and recent graduates from the prestigious Hochschule für Musik und Darstellende Kunst trained under the BD teaching artists, becoming conversant in the Dancing to Connect rubric and assisting our staff in translation and program direction. A Syrian refugee dancer and a former Dancing to Connect participant were similarly trained in Brandenburg; as were two professional hip hop dancers in Magdeburg.