Jonathan Hollander, the dancers of Battery Dance Co. together with Edie Bachman, the American Consul for Political and Economic Affairs, Holger Backhaus-Maul, Sociology Professor at the Martin-Luther-University and Ingrid Häußler of Bürgerstiftung Halle (Citizen's Foundation of Halle) gathered for a press conference on the Dancing to Connect program.
The Frankesche Stiftungen Building has been on the German proposal list as a UNESCO World Heritage Site since 1999. Today, some of the historical buildings are almost completely restored and the ensemble has been revived as cultural and scientific, social and educational institution.

See the narrative for lessons learned.

Battery Dance was presented in three concerts at the MU Theatre in Budapest, Gerzson Peter Kovacs, Artistic Director. The Company presented a mixed-bill, comprising 6 songs from the Songs of Tagore production, Moonbeam, and Layapriya. The Tagore songs were performed with live musical accompaniment by vocalist Sharmila Roy, a world-renowned Bengali singer and her regular tabla accompanist John Boswell of the U.K.

Two of the performances, on Saturday and Sunday evenings, were marketed to the MU Theatre's substantial dance subscriber list and the general public via advertisements and listings in Budapest's arts & events magazines and daily newspapers.

The performances were sold-out and the audiences were noticeable for their multi-generational character. Rhythmic clapping at the end of the program attested to the audience's enthusiastic response to the work. A write up by Dr. Gedeon Dienes, dean of Hungarian dance writers, was further indication of the Company's reception.

The third concert, presented on Monday evening and followed by a reception, was arranged with the support of the American Embassy and Citibank. The audience was extremely international and included Ambassadors and diplomats representing the U.S., Mexico, Portugal, India, Hungary, the U.K. and Finland. The American Ambassador, gave an impassioned introduction prior to the performance, and hosted the reception afterwards.

Battery Dance Company sought out opportunities to teach young people in schools and local dancers in Budapest to take place during its residency. Though this type of activity is not common in the region, we found a partner in Adrienn Szabo and her non-profit, non-governmental organization called The Workshop Foundation, based at the Trafo Center for the Arts. Adrienn set up a three-day workshop entitled "Yoga For Dancers", taught by Battery's Katherine McGowan, which was attended by a 12 dancers from Budapest's active dance scene. Having never before set up dance programs in public schools, Adrienn had a difficult time establishing the contacts and organizing Battery's lecture-demonstrations. However, she managed to set up programs at a public middle school, a public high school and the American International School. We learned afterwards that this was the first time any contemporary dance company (including locally based ones) have ever brought their programs into Hungarian schools.

Battery Dance Company worked and performed at the Varna Festival (Bulgaria) in 1999.

The Varna Festival was the last engagement in a tour that also included two festivals in Slovenia: Lent Festival in Maribor and Krizanke Festival in Ljubljana; and the European Cultural Month Festival in Plovdiv, Bulgaria.

Claire Pannell, BDC Company Manager, and Barry Steele, Production Designer (and man of all trades) led the tour, with critical assistance from our dancer Tadej Brdnik, a native of Slovenia, who was able to serve as translator on a linguistic and cultural level (and who also helped us obtain the Slovenian engagements.)

The opera house in Varna (see picture on the right) was visually beautiful but presented some serious problems. The stage was rickety and wooden with big hand-winding contraptions underneath to move sections of the stage up and down. In the minds of the crew, they had flattened the stage in preparation for our performance by making all the wooden floors match up to some extent. However, the large gaps between sections were not safely dealt with by the thin linoleum that had been laid across the stage (without gaffers tape to hold it down.)

A technique came into play that we have since used elsewhere (see Baku, Azerbaijan, 2008). Large cardboard boxes were flattened to bridge the gaps and then the linoleum was restored and taped into place. This solution was not ideal and the dancers had to navigate carefully during their performance so as not to catch a toe or lose a balance.

We have fond memories of Maria, our translator, who was outstanding in every way. She became an integral part of our group, and we remain grateful to this day. 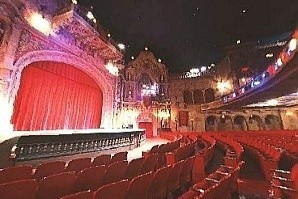 Battery Dance Company was invited to perform in the central Bulgarian city of Plovdiv during the European Cultural Month Festival, associated with the European Capitals of Culture program initiated by the Greek actress and cultural activist Melina Mercouri. The tour that emerged from this invitation eventually included other festivals in Maribor and Ljubljana, Slovenia, and the Varna Festival in Bulgaria. Key to the invitations and the workings out of arrangements in Slovenia was Tadej Brdnik, a Slovene dancer who was a member of Battery Dance Company (and Martha Graham Dance Company), and who was already well known in his native country. The Bulgarian leg of the tour was built through the guidance and networking of Milena Savova, a linguistics professor based in New York, originally from Bulgaria.

This was the first international tour for Battery Dance on which Jonathan Hollander, Artistic Director, was not present. However, with Production Designer, Barry Steele, Company Manager, Claire Pannell, and Tadej himself on the tour, the Company was in good hands.
Challenges abounded with travel arrangements – getting between Slovenia and Bulgaria was an unexpected complication with airlines routes. A train ride to Vienna from Ljubljana followed by a flight to Sofia proved to be the only way; however, arrival in Vienna in the early morning hours and a long wait before the afternoon flight to Sofia could have been exhausting for the Company, having taken the night train immediately after performing in Ljubljana. Fortunately, a good friend of the Jonathan’s, the Viennese journalist Ruth Pauli, opened her apartment to the Company, providing a hearty brunch and towels for everyone with an invitation to utilize the shower (and to nap on any of the beds, sofas or other convenient surface.) Once in Plovdiv (after another train ride from Sofia) The company stayed in a casino hotel where their meals were also provided. The Festival had originally planned to have BDC perform at the ancient Roman Amphitheater. However, Barry said “No” when he realized that the stage was stone instead of the platform wooden stage that was expected. Instead, the performance was moved to an old European-style opera house with a raked stage in extremely bad condition.

Since there were only 16 lights in the theater, of which 14 or so worked (and no spare parts in the theater with which to fix them), Barry concentrated his efforts on making the stage danceable so that the show could go on…. and it did!

Before the opening night, there was an episode regarding “stolen” properties in the theater – which turned out to be a Marx Brothers routine. One of the dancers could not find her clothes that had been stored in a locker, and all Hell broke loose with accusations flying in every direction….. until it was discovered that she was on the wrong floor of the theater where there was an identical set of lockers ! Lots of apologies had to be made to the local crew who were offended, of course, by the false aspersions that had been cast.

Maria Todorova, the translator and guide assigned to the Company by the Festival, was a life-saver, helping the company navigate its way through the twists and turns and assuaging the feelings of the crew.