Work and Incorporate Your Surroundings

Battery Dance conducted a performance at Dragao do Mar that was highlighted by an innovative artistic collaboration with visiting Iowa poets, which saw Battery’s dancers improvise dance to poetry read aloud. While the performance occurred, the poetry translation was projected on a white wall of the building and some of the dancers incorporated the surrounding architecture into their dance. This resulted in audience that continuously grew over the course of the hour as passers-by and pedestrians stopped on the bridge, stairwell, an surrounding plaza to watch the performance form multiple angles. The performance was then featured on the most widely watched morning show in the state. Do not be conservative in your performance- push the boundaries of what you can do, and greater interest will follow.

Understand the Capacity of Local Partners

Unlike Belem, local partners in Fortaleza were fewer and not as well funded. As a result, workshop venues were good but not great in the city. Marley matting was very old and sometimes laid on concrete and some venues were too small. If possible, try to understand your local partners’ budget range and equipment inventory so to know what their capacity is. Also be sure to get pictures of venues prior to your arrival in-country so you do not need to improvise on the ground.

Be Prepared to Call on Seemingly Unrelated Vendors

Similar to Belem, Fortaleza is a city ruled by contracts and contracted responsibilities. In the Theatro Jose de Alencar, the technical crew is bounded to only work within the constraints of their contract. For our program, this meant that they could not touch equipment (the backdrop) that was installed by an external company. Understand the local work culture at the beginning of your program and be prepared to call on those who are contractually responsible for troubleshooting.

Do Not Assume Local Theatre Staff Have a Procedure

A half hour prior to performance start, and local theatre staff, responsible for taking tickets, handing out programs, and directing audience were no-where to be seen. Usually, theater staffs have their own set of procedures on what to do prior to a performance. This was apparently not the case, and resulted in program managers and local host staff handling those duties at the start. In negotiations with the local theatre manager, be sure to include a schedule and detail of where staff should be, what duties they should undertake, and when. Do not assume that local procedures are setup.

The State Government of Ceara provided very generous and comprehensive support for the program in Fortaleza: A large van was provided and dedicated to the Company throughout its stay; Carla Tauscheckt from the State Government acted as BDC’s official city guide; and hotel accommodations were provided for the entire Company.

Unlike the previous programs in the tour, workshop groups in Fortaleza were organized with one main local partner: BCAD, a non-profit organization that works to assist the most disadvantaged communities in Fortaleza. BCAD hosted 3 workshop groups at two locations, while another local partner closely associated with BCAD, Ballet Lucymeire Aires, hosted two workshop groups at one location. Each workshop venue location presented a structural problem. The floor in the three larger venues was problematic – in one case, it was laid directly on top of concrete; in the other, an old dance mat (Marley) was so thin that it folded and twisted as dancers turned or pivoted. The other two venues had excellent flooring but were too small for the workshop groups. Understanding that this was a result of local limitations, the BDC teaching artists accommodated and worked together to alternate rooms.

Five Dancing to Connect groups held workshops for 4 hours per day for 5 days with approximately 18 students in each group. Participants were low-income disadvantaged youth and young adults. Melanie Brooks, a Senior English Language Fellow with IFCE/IBEU, coordinated all of BDC’s translation needs for the program. Once again, the translators were essential to the success of the program, and Melanie was able to coordinate teams of two to three translators dedicated to each teaching artist.

The Dragão do Mar performance on Wednesday May 16 coalesced around an innovative artistic collaboration which saw Battery Dance Company’s dancers creating choreography in response to poetry read by the American poets, who were also visiting Fortaleza as a part of a separate ECA-funded program. The collaboration with the American poets from the Iowa writing program was the brain-child of BDC’s Artistic Director Jonathan Hollander, Embassy Brazilia’s IRO Carol Brey-Casiano, and Consulate Recife’s PAO Heidi Arola.

While the original plan called for each dancer to be paired with a poet, two of the visiting poets were unable to obtain visas in time, leaving Sean and Robin without partners. Production designer Barry Steele projected translations of the poetry onto the side of a building while the dancers made use of the surrounding architecture around the stage for their performances. In the second part of the performance, BDC performed an excerpt of ‘Perceptual Motion’, a series of three duets that showcased the artistry of the Company. The event was rather sparsely attended compared to BDC’s other performances but the inclusion of print media and television coverage amplified the impact. ‘Bom Dia’ Ceara, the State’s most widely viewed morning show, carried a feature on BDC and the poetry/dance event the next morning. FSN Edvaldo Amorim was a great asset: he was able to secure a private dressing room for the dancers at the location, acted as MC for the program, and at one point requested that nearby businesses turn down their music volume so to not disturb the performance.

Barry Steele presented two technical workshops at the Jose de Alencar theatre attended by approximately 30 theater technicians and designers. Andres, the technical manager on loan from BCAD, provided translation for the workshops and was key to Barry’s negotiation of the production schedule with the manager of the theatre. Andres, an extremely knowledgeable stage technician and excellent translator was of tremendous help to Barry up until 2 days prior to Barry and his technical trainees at the Theatro Jose de Alencar performance, when, without notice, he disappeared. In his place, FSN Edvaldo Amorim took over essential communication between Barry and the local theatre technical crew helping to prepare for and carry out the final performance.

Tickets for the final performance, held at the Art Nouveau Theatro Jose de Alencar, were all claimed within 5 hours. The performance was attended by U.S. Principal Officer Usha Pitts, who gave opening remarks and presented local partner Janne Ruth with flowers at the end of the performance. FSN Edvaldo Amorim acted as MC and managed to secure a speaker’s podium from the Brazilian Army Ministry before the show. The audience responded to the show with thunderous applause and cheers, at one point expressing their approval in the middle of Sean’s group piece, and at other times shushing the workshop students who continuously screamed out their teaching artist’s name as the BDC dancers performed ‘Perceptual Motion’. 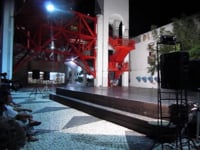 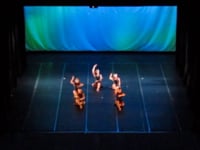 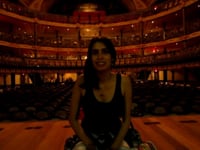 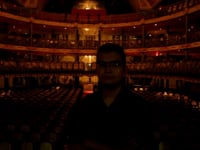 Resource: Technical specifications for the theater.