The Importance of Translators

As part of Battery Dance Company’s 2012 South America Tour, we conducted one week Dancing to Connect programs in the northern cities of Belem and Fortaleza. As we quickly found out, the English language capacity in Brazil is very very low (lower than many of the African and Asian countries we toured). When touring to Brazil, do not underestimate the need for translators. Also, try to have translators paired with your local teachers/artists for the duration of the program so the learning curve does not need to restart each day. In Brazil, we were fortunate to have volunteer translators from CCBEU (Belem) and IBEU (Fortaleza), but did not have the hind-sight in Belem to keep translators with the same dancer for the whole week.

In Brazil, not all bank branches exchange currency. To prevent running from branch to branch, go to a currency exchange company where you will receive a favorable rate. But be sure to visit before 5 pm when they close.

Do Not Assume Your Security

Brazil is known for muggings. The greatest threat is against solitary individuals who are wearing jewelry and walking alone at night. Prior to arrival in-country the BDC team was notified of this risk. However, when walking near your hotel, this risk is rarely considered. Unfortunately, a member of our team was mugged and cut badly only one block from our hotel at the Hitlon-Belem near sunset time. The injuries turned out to be only minor and the thieves only acquired a fake watch. However, the event could have spelled disaster for the remaining tour. Do not underestimate the risk to your security when travelling to high risk areas, even for what might seem to be a harmless short walk to the nearby convenience store.

Be Sure to Turn on All Lights

In Brazil, there are processes and controls to everything. Your production schedule and use of a theater will be laid out in a contact that clearly spells out what will occur each day and by who. Any variation to this no matter how small will require additional negotiation and contract amendments. In Belem, not understanding this rigorousness, we failed to mandate that all lights in the historic Teatro da Paz be turned on during technical preparation days before the performance. On performance day, when all the lights were finally turned on an hour before performance, an electricity shortage caused the speakers to malfunction slightly creating an annoying buzzing sound. Thankfully, our Production Designer Barry Steele was able to work feverishly to dull the sound prior to performance start. Nevertheless, be sure to have a full electrical run through prior to performance day and to include that requirement in any contracts drafted.

Be Open to Creative Ideas and Ready for Adjustments

In an innovative plan, fashion designers from local partner Industry Esperenca designed custom costumes for the Dancing to Connect participants that were then sewn by local inmates in Belem’s prisons as part of their rehabilitation and reintegration program. The costumes were ready on performance day morning but one set needed slight modifications. Luckily, the designers were on hand to make the necessary changes. The students loved their costumes and had another memento of their experiences while the Dancing to Connect program reached new audiences and affected new people. Be open to new ideas that do not necessarily fit with your standard project plan – you may find new models for greater impact.

At Teatro da Paz, we were able to use the different spaces within the theater for group rehearsals throughout the day. In one group, one of the participants dislocated his toe and the choreography for his group had to be reworked. Luckily, we had both enough space and time for this to occur. After a visit to the local hospital the participant was able to return in time, but be sure to have enough spaces and time on performance day for rehearsals up until performance. Also be sure to have your local partners present at the theater throughout performance day in case emergencies occur.

Upon arrival in Belém, the BDC team went straight to work alongside ACAO Justen Thomas and FSN Angelina Smid . A press conference at local partner IAP introduced BDC to local partners, teacher-trainees, and a video team that is creating a documentary of the Dancing to Connect (DtC) program in Belém. During the press conference, the dancers met and exchanged ideas with fashion designers from Industry Esperanca. In an innovative plan, inmates in prisons throughout Belém would sew custom made costumes for all the participants of the DtC program. After their meeting and the press conference, the BDC team inspected venues and received a tour of the magnificent Teatro da Paz, a historic landmark. The dancers began improvising dance on stage much to the delight of the video and photography crew. Through a multitude of local partners who worked in sync with one another, five DtC groups with approximately 20 students in each group held workshops for 4 hours per day for 5 days. The organizing local partners were:

-IAP (Institute of Art for the Para State): A government-supported arts organization

-ProPaz: A government-supported organization dedicated bettering the lives of the poorest and most disadvantaged communities

At IAP and a fifth workshop space located in the very large rehearsal room at the top of the Teatro da Paz, workshops were led by Robin Cantrell and Bafana Solomon, respectively. Carmen Nicole and Mira Cook led the university student workshops at UFPA and UEPA. Sean Scantlebury led a ProPaz student workshop at their campus on the outskirts of Belém. Many of the ProPaz students came from disadvantaged backgrounds and some had been victims of abuse.

In Brazil, where class divisions are extreme, the DtC workshops broke down barriers and introduced students to areas of their own city where they had never been before. Some of the participants in Bafana’s group expressed their worries over interacting with the wealthier students, an interaction they had not experienced before. They also informed Bafana that this was their first time being in that part of the city or seeing the historic theater other than in photographs or television. Many of the students dreamed of one day performing in the theater, but never thought that their dreams would be realized.

Production Designer Barry Steele was attacked by two thieves one block from the theater, which was situated across the street from BDC’s accommodations at the Hilton Hotel. In the process of fighting off his attackers so they would not take essential technical equipment stashed in his backpack, Barry suffered a deep gash wound above the eye and was rushed to the hospital. ACAO Justen Thomas, FSN Angelina Smid, and a representative from local partner IAP were on hand at the hospital to oversee Barry’s medical care, and to guide him through the hospital and police processes. Angelina also enlisted the help of the former Minister of Justice for the State, who expedited the police process and offered armed security for the duration of the program. As a result of the excellent care provided to him from the hospital and the Embassy staff, and his own resilience, Barry was ready to go back to work in the theater the next day.

While Barry and the Embassy staff were busy in the hospital, the BDC team met with the Industry Esperanca fashion designers who presented their conceptual drawing for the costumes. A Hilton desk receptionist kindly provided translation for the meeting. The dancers were thrilled with the costume concepts and the designers offered to have suits made for them as souvenirs.

In an effort to increase awareness for the final performance, the dancers performed an excerpt of ‘Perceptual Motion’ at CCBEU. CCBEU, an English language institute funded by the Department of State, is the last remaining American institutional presence in Belém. The much needed translators required for the DtC workshops and for Barry’s work in the theater were also being provided in-kind by CCBEU. As a result of a city-wide transit workers strike, much of the expected public audience was unable to attend the show. In their place, the employees and students of the institute filled the audience and eagerly asked questions after watching the performance. Media in attendance published a review of the performance while giving the public advance notice of the final performance to be staged at the Teatro da Paz.

The U.S. Embassy Brasilia hosted a group lunch on performance day at the Hilton-Belém for all participants, local partners, and the BDC team. During the reception, Ana Unger’s professional dancers conducted a short performance, and shortly after everyone in attendance spontaneously rushed to the front of the room to dance together.

SIDE NOTE: On a quick visit to the local zoo and botanical garden, Carmen became the main attraction for a group of visiting high school students, adding new meaning to the term ‘people-to-people diplomacy’. As the team and ACAO Ramona Sandoval left the zoo two heavily armored security officers began to ask us questions. Minutes later we began to understand that these were our ‘assigned’ security officers. They provided us the address for our next destination and then said goodbye.

Tickets for the final performance at Teatro da Paz, which has a capacity of nearly 800 persons, were given out within 2 hours. Male and female dressing rooms were provided for each group and the dancers were each assigned their own dressing room where they changed into their custom-made costumes. A few alterations were necessary for Carmen’s group and the Industry Esperanca designers worked quickly to make the adjustments. The dancers made full use of the theater, using two workshop spaces to continue rehearsals throughout the day. During Carmen’s group rehearsal, two hours before performance start and before her group’s on-stage rehearsal, one of her participants dislocated his big toe. More distressed about the prospect of missing the performance than his toe, he begged someone to ‘pop’ it back in. The participant was instead driven to the local hospital as Carmen’s group hurried to the stage to prepare the necessary changes to their choreography.

A half hour prior to performance start, a problem with the speakers manifested, creating a loud buzzing sound, probably as a result of reduced electrical power when all the theater lights were turned on. Production designer Barry Steele worked quickly to reduce the annoying sound, and the performance was able to begin on time. Remarkably, the participant who was rushed to the local hospital made it back in time to perform with his DtC group. The audience thoroughly enjoyed the performance, at one point clapping in rhythm to the singing of Bafana’s group.

After the performance, a reception was hosted on the grand balcony of the theater, where the BDC team and Embassy officers interacted with local partners and government officials. 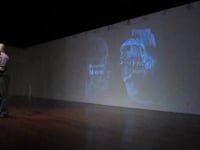 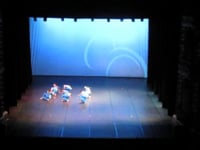 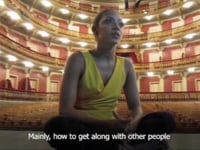 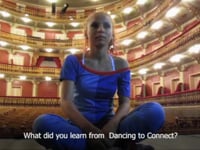 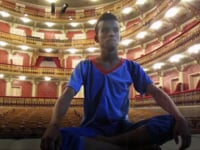