When our team was en route to Nigeria, warnings were issued by the State Department regarding the potential of bombings at Western hotels in Abuja, the capital. Our group was headed for Lagos at the other end of the country; but nonetheless, family members could have been alarmed. Fortunately, we have a file of emergency contacts for each of our people and this was the time to send out periodic bulletins to make sure that everyone near and dear was kept apprised of our team's whereabouts and condition (which, fortunately, was perfect.) We also used FB and our blog to post updates (nothing alarming, just a day by day status report) to assure the larger network of friends and family.

Through the bonding that our team did with the founder/director of the Society for the Performing Arts of Nigeria Sarah Boulos (who was pivotal in organizing our programs in Lagos), discussions ensued regarding the bringing of a group of dance teachers from SPAN to New York to participate in the workshops Battery Dance Company was organizing for its annual Downtown Dance Festival. It is almost unbelievable to realize that within less than 1 year, this plan was brought to fruition. BDC assisted with the visas and steeply discounted hotel rooms. Sarah pulled together the funding; and 4 wonderful Nigerians appeared in New York for an intensive series of workshops over the period of two weeks in August, 2012. Unfortunately, several others were not granted visas by the Consulate in Lagos, despite all efforts, pointing to the sometimes seemingly random results of applying for U.S. Visas by foreign nationals.

Battery Dance began its 2011 Africa Tour by first stopping in Lagos, Nigeria and Maseru, Lesotho. In order to visit all four of the African countries part of the tour, the group was split into two smaller teams of three. Robin Cantrell, Sean Scantlebury, and Barry Steele formed one team and traveled to Nigeria and Guinea. Carmen Nicole, Bafana Matea and Mira Cook comprised the other subgroup and worked in Lesotho and Zambia. Robin, Sean, and Barry stayed and worked around Lagos, Nigeria. Nigeria, the most populous country in Africa is bifurcated along sectarian lines; Muslims mainly inhabit the northern part of the countries while Christians reside in the south. Unfortunately, these divisions often lead to political instability and civil strife, making Lagos, the former capital and chief city relatively unsafe.

Despite these challenges the group successfully interacted with the locals and admired their dancing abilities. Robin and Sean were faced with the challenges of miscommunications and a lack of adequate rehearsal space, as the Society for the Performing Arts of Nigeria (SPAN), was the only dance studio in Lagos. Robin found her group to be particularly talented and expressive and enjoyed conducting the Dancing to Connect workshops with a group of 13 dancers between the ages of 21 and 32. After Barry rendered the National Arts Theater’s sound system usable, the students conducted a Dancing to Connect performance while Sean and Robin performed 3 duets at the venue. Additionally, a local traditional African group displayed their own piece.

The team benefited greatly from their relationship with Sarah Boulos of SPAN and Segun Lawal. Sarah came to New York in January 2012, to attend several conferences and meet the rest of the company. Her experience with Battery Dance and the DtC workshops encouraged her to pursue further bilateral engagements with Battery Dance. Four DtC participants from Nigeria were also able to travel to New York to take part in the August 2012 Battery Dance Company’s Downtown Dance Festival. 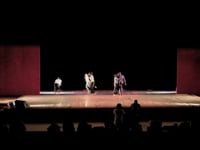