Battery Dance Company worked and performed throughout 4 German Cities in July - October 2017. Participants of the Dancing to Connect Refugee Integration Program completed survey questionnaires both before the program and after. The goals of the questionnaires were to evaluate the effects of the Dancing to Connect programs on participants, and to learn of aspects needing improvement or change. The total number of respondents to the pre-program questionnaire was 255, and 295 for the post-program questionnaire. Each program was approximately 1 week long. The programs were led by Artistic Director Jonathan Hollander, Vice President Emad Salem, and Teaching Artists Robin Cantrell, Sean Scantlebury, Clement Mensah, Bethany Mitchell, and Razvan Stoian.

An analysis of the pre-program and post-program surveys yielded significant results. Over the course of the Dancing to Connect program there was:

For the second year in a row, Battery Dance transformed its Dancing to Connect methodology to address the humanitarian issue of refugee integration across the German nation. The plan for 2017 included two phases, necessitated by the school schedules in the Federal States of Baden-Württemberg, Sachsen-Anhalt and Brandenburg.

Each workshop followed the parameters Battery Dance employs in all of its Dancing to Connect programs: +/- 20 students, ages 14 and up, comprise each workshop. Twenty hours of workshop time were spent in the creation of an original dance work in which the participants generate movement sequences that are shaped by BD teaching artists and their teacher trainees into works of choreography which the participants perform on a large stage with fully professional theatrical conditions alongside performances by Battery Dance from its repertoire.

The unique element of this initiative is in the composition of each workshop group – a mixture of refugees, some of whom are unaccompanied minors, with their German counterparts. Changes were observed in each workshop – German students began to cross the chasm that separates them from refugees, refugees became more at ease in expressing themselves physically and verbally, stories were shared and empathy increased. By the performance day, groups were cheering each other, participants from different backgrounds formed an indivisible ensemble, pride was overflowing. Refugees from conflict zones in Syria, Afghanistan, Iraq, Iran, Kosovo, Gambia, Eritrea, Ethiopia, Somalia and elsewhere had made their way to Germany in harrowing conditions, escaping from unimaginable devastation. Seeing them free themselves, at least temporarily, from the grip of their nightmarish past, and their hankering for their families and friends back home, was tremendously moving.

An evaluation of the program was undertaken by BD staff using matched entrance and exit questionnaires filled out by participants in each of the three program sites. The results have since been analyzed and reveal several significant improvements experienced by the participants of the program.

I would like to take this opportunity to commend Jonathan Hollander and his dancers for all that they do to promote intercultural understanding. Over the past twenty years, the Battery Dance Company has performed in over 60 countries on 6 continents. It is a dance troupe of international renown. But what makes the Battery Dance truly incredible is its commitment to the Dancing to Connect initiative that it launched over a decade ago.

Both my wife Michell (U.S. Embassy Cultural Attaché) and I have devoted our careers to diplomacy. We have both seen many worthwhile and gratifying examples of cultural diplomacy. Well, Battery Dance is cultural diplomacy – dance diplomacy – at its best. It brings people together through creativity and team building. As Jonathan Hollander says: "You can't dance with someone you don’t trust."

In my opinion, that is the key to the Battery Dance’s success as an agent of change and social action. Dancing to Connect has held workshops focused on providing hope, confidence, leadership and life skills to the least advantaged youth in society. It has conducted sessions focused on combating xenophobia and ending discrimination whether it be based on religion, nationality, ethnicity, age, or class. It has shown how public perceptions of the disabled can be changed, and brought attention to the needs of disabled communities around the world.

They are all part now of a broader community, not just here in Freiburg, but a global Dancing to Connect community. For just as Dancing to Connect becomes embedded in the countries it visits, it also communicates a sense of awareness of the world as a whole and an openness to different cultures. This in the inspiration and passion that drives Jonathan and his dancers. And it is something that we can all learn from. 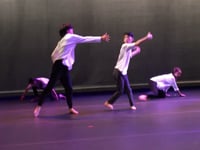