Flexibility is the key

The Swaziland program was shorter than we would have liked and the conditions were very rough. However, given the lack of resources in Mbabane and the fact that we were working with young unemployed adults, the impact seemed to have been very powerful. Enforcing standards that would have seemed appropriate from our vantage point in New York – vis a vis the number of hours and participants, type of facility – as well as rules and regulations that would have prohibited new people to join on the second day and so forth – would have capsized the program. Likewise if the teaching artists themselves had held to a pre-determined standard, either literally or in their minds, they would have been disappointed. In the end, we felt that we reached goals of interpersonal connection and encouragement that exceeded our expectations. We were open to the differences and reaped the benefits.

Bafana Matea and Sean Scantlebury arrived in Mbabane in the early afternoon on October 17, having been delayed due to weather conditions, they were met at the airport by Marjorie Balarin of the Embassy’s Public Diplomacy Staff. Marjorie escorted them to the hotel, Ezulweni, where they checked in and rested. Afterwards, Marjorie and her husband took them out to dinner at a local Portuguese Restaurant. On the morning of October 18, they were picked up at 8:30 a.m. from the Hotel and escorted to Mbabane Theater Club.

The first morning workshop was scheduled for 9 a.m. Participants arrived a bit late and the session began at 9:30 a.m. Some were wearing jeans and boots and their preconception was that the workshop would be in the hip-hop style (a misunderstanding that the teaching artists have experienced elsewhere in the past.) There were 25 participants the first day, 23 young men and 2 young women. A few people drifted out of the workshop as the day progressed; otherwise, the session went from 9:30 a.m. until 3, with a 1-hour lunch break. “The food was delicious; everyone ate together, which provided a nice opportunity for socializing.”

The participants were interested in knowing how Matea and Scantlebury had gotten started in their careers as dancers. They also wanted to know about different styles of dance and methods of training and were curious about the project itself, wanting to understand what were the goals and expectations as well as how it would be accomplished.

Some of the participants expressed the fact that they didn't have opportunities in Swaziland to pursue the arts. This pertained to performing arts such as dance, theater and music, as well as the graphic and fine arts. The content of the first day consisted of a warm-up, stretching and exercises of moving across the floor (i.e. basic modern dance elements.)

The participants who appeared on the second day were far better prepared in terms of clothing and attitudes. Six young women joined the workshop on the morning of the second day. Clearly the word got out into the community that the program was going on and that the teaching artists were open to accepting new students. In essence, the workshop stayed at the same number (24 +/-) because for every participant who had dropped out the first day, there were new entrants.

The teaching artists decided that it would be advantageous to split the group in two, having the women working with Matea and the men working with Scantlebury. In this way, the teaching artists felt they could make the most headway by catering to the particular skills and techniques of each group. It seemed important to the confidence and comfort of the participants to clearly define the style by gender.

Since the program was so abbreviated, it was important for the teaching artists to begin stitching the material together even at this early point, because they knew that at the end of the third day, the dance would be performed. The participants were young adults, ages 19 – 28, and were able to handle the pressure of quick creation and nearly instant performance. They had a lot of self-confidence, high level of dance, theater and musical talent, and at the same time, were open to the new and different ideas and styles that were being introduced.

Since many of the participants already had fixed ideas of what they wanted to accomplish and perform, the teaching artists had to discover a way to incorporate the existing material and ideas and at the same time, build new understanding about the range of dance expression and technique. They were sensitive to the feelings and background of the participants and showed respect for what they came with. Therefore, the end result contained a mixture of what had been known and what was new.

The performance piece was completed and polished; the order of the program was established incorporating pre-existing dances and music by the participants and solos by the teaching artists. Scantlebury was interviewed on local radio with two well-known performers of Swaziland who were participating in the workshop and there was coverage in the local news. The advertising and outreach for the performance was modest, given the fact that everything was so new and no one knew in advance what the results would be. However, the artists guess that over 100 people were in attendance.

The U.S. Ambassador and representatives of the press also attended. Bafana and Sean sum it up: “We came to Swaziland as professionals and teachers; but we left as students. We learned so much about the life and challenges of the Country; particularly the struggles that artistic people face there. We feel that we left the participants with a sense of optimism and opportunity and new dreams. We were asked repeatedly whether we would be coming back. As far as we are concerned, we would love the opportunity to do so.” The next day the teaching artists departed Swaziland. 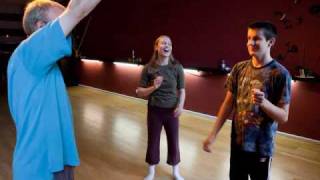 None of the teaching artists from Battery Dance Company spoke both German and English. This caused some difficulty with communication between BDC and local German students. However, the Dancing to Connect workshops use dance to serve as a universal language, from which the students can learn and build relationships.

Dancing to Connect, the international arts education initiative of the Battery Dance Company, entered its fourth year with a 33-day program that stretched across Germany in Autumn, 2009. Between September 13 and October 16, the team of 12 artists from New York City’s Battery Dance Company and its partner company Drastic Action taught choreography workshops to students from 18 high schools. Over 300 students were engaged in creating dances that responded to the history of the Fall of the Berlin Wall and the so-called Peaceful Revolution in the 20th Anniversary year of those events. A striking feature of the program was in the selection of participating schools: with only one or two exceptions, the schools were all of the lower rank of the German secondary educational system (Hauptschules, Realschules and/or Berufskollegs) and the students were often children of immigrant families.

The dance interactions proved life-changing for many participants according to their teachers and school principals. Reiner Düchting, Headmaster of the Hauptschule am Stoppenberg in Essen offered this assessment of Dancing to Connect:

Many girls and boys of our school are shaped by numerous frustrations and disappointments which are linked on the one hand with their bad results at school and on the other hand also with their difficult family and social backgrounds. They experience and judge this as their individual failure and develop thereabouts worries, fears that they won’t find the place in society which they want after school and which they - because of their abilities - normally could have hoped to achieve. Their fears are not without reasons: less than 50 % of those students find an apprenticeship after school. That’s why they fear the future and are not much motivated for the tasks and challenges of the present. The dancing project is for them a great experience which gives them energy and helps developing their self- esteem. The close, family-like bonds in the dance group during the training, the ability to express their experiences, their personal strength, wishes, hopes, moments of their personal history through the dancing, the efforts and strain because of the dancing, the encouragement through the coach, the work for a common joint, the performance, are not limited to this one project: This period of time and these experiences together with the performance in front of parents, teachers, brothers and sisters, friends and foreign people will be encouragement for their further development, they will give motivation and stimulation like a “lighthouse” does, to find their own way with more strength and self-esteem.

The Berlin Lehrerzeitung, Berlin's newspaper for the teaching profession, added, "There are high points in school life that leave permanent traces in all participants and which they will remember with eyes agleam because they make school something special. Dancing to Connect was such a high point."

Performances took place in mainstream public theaters in Sachsen-Anhalt, NRW and Berlin-Brandenburg, drawing large crowds of people of all generations. Many in the audience, attracted by the participation of a family member in the performance, had not previously frequented the theater. The performances garnered national attention through a five-minute feature on the popular public television broadcast, "Nachtmagazin". The Markische Allgemeine Zeitung titled its review, "The New Youth Movement" and described the performance in the Nikolaisaal as "an exceptionally fresh stage program with lay dancers and professionals." The involvement of the professionals as well as the students on stage and back-stage introduced yet another element of connection and validation: This was not a student performance and as such forgiven for lack of polish; rather, the students rose to the level of professionals and comported themselves accordingly.

The structure of each Dancing to Connect workshop matched two professional teaching artists with approximately 20 students, ranging in age from 14 - 21. Both boys and girls participated, and most often grade levels were mixed. In NRW and Berlin-Brandenburg, the groups were composed of students all of whom came from the same school; however, in Sachsen-Anhalt, schools were combined, enabling students to be involved from 8 instead of 5 schools. In all but one case, students participated voluntarily; and in all cases, students were freed from their academic requirements so that they could focus exclusively on the dance project for the six workshop days as well as the performance day.

As in past years, the ability to understand and communicate in English was a side-benefit of the project as none of the teaching artists spoke German and English was the medium for teaching in the dance workshops. Personal involvement with the history of their parents’ and grandparents’ generations and a profound exploration of the dramatic political and social events of 1989 in Germany were also notable benefits for the students, who, in many cases, appeared to be only slightly familiar with these circumstances at the beginning of the project.

In September 2009, Battery Dance Company participated in the first Dance and Diplomacy Roundtable at the Cultural Diplomacy forum.