During the month of October, 2010, a team of 8 members of the Battery Dance Company engaged in a tour of Africa, criss-crossing the continent from Algeria to Kenya and Tanzania, from DRC to Namibia. The primary reason of the tour was to engage young Africans in a profound manner through the Dancing to Connect program, transferring knowledge and skills in the areas of choreography, team-building and self-empowerment through dance. Also important was the opportunity to perform BDC’s repertoire for audiences that would ordinarily lack access to the American form of modern dance.

Battery Dance Company’s program in Algeria was the brainchild of the American Public Affairs Officers (PAO) and Foreign Service National (FSN) in Algiers. This creative and hard-working duo of U.S. Embassy PD staffers had been introduced to the BDC approach in February, 2010, through a 10-day program in Algiers and Oran with two of the Company’s teaching artists.

Building on the success of the earlier program, the Public Affairs Officer and Cultural Affairs Specialist worked with BDC’s artistic director Jonathan Hollander to devise a framework that would maximize the impact of the full company’s presence via Dancing to Connect (DtC) workshops and performances. An emphasis was placed on the importance of engaging young people and reaching out from the capital to under-served communities. The biggest impediment proved to be the Algerian Ministry of Culture, an agency that operates by the rule of “later”. In Algeria, the US Embassy cannot run any cultural programs without the Ministry’s consent. BDC’s programs involved very active collaboration with the national ballet company (L’ONCI), local dancers and theaters, thus making the Ministry’s participation all the more crucial. Even to get to the starting gate – obtaining visas for the Company – the Ministry’s approval had to be in place. Curve balls were flying in all directions during the weeks leading up to the program, despite the fact that initial meetings had yielded an enthusiastic response. There were at least three changes of cities, the last of which occurred even after the Company was en route!! To be fair, some of these changes were the result of security concerns on the part of the Embassy.

The DtC program in Algiers consisted of a week of training with three groups of dancers from L’ONCI – all day sessions with 2 BDC teaching artists working with 15 – 20 Algerian dancers from the age of 18 – 30. It was generally thought that the male dancers outshone the females in terms of athleticism, technique, performance quality and enthusiasm. But the buy-in was exceptional in almost all cases. Publicity and media coverage was excellent throughout the Algeria program including a lengthy interview on the national television show “Bonjour D’Algerie”.

After touring in Annaba and Eulma, BDC returned to Algiers and were reunited with the dancers from L’ONCI for a grand performance at the Salle el Mouggar. The return journey to Algiers from El Eulma warrants a full description -- everyone involved was imagining newspaper headlines reporting the tragic death of 8 dance company members and two USG officials in Algerian road accident. Ironically, the rationale for this road trip (in the wrong direction, away from Algiers, in order to fly to Algiers) was the concerns of the Security Officials at the US Embassy. This terrifying adventure involved a pre-dawn departure, fishtailing bus on slick roads, accompaniment by Algerian security vehicles that switched off every time a county line was crossed and who were far more hindrance than help, channeling the company via backstreets rather than highways. BDC arrived at the airport in Constantine with 10 minutes before their flight was scheduled to depart. Luckily or unluckily, depending upon how you look at it, the flight was cancelled. The FSN went into over-drive, re-booking us on another flight that in a crazy twist of fate, would make two stops, the first being Setif from which we had just driven. The pressure was extreme because the company had a performance that night in Algiers and had major technical rehearsals and brush-up to do with the local Algerian dancers. Instead of arriving at the theater at 9 a.m., they were almost two hours late.

How BDC's production director got the lights hung and focused and the show cued and ready to go at 7 pm is completely unfathomable. But he did, and the dancers were amazing. One BDC dancer was sick to his stomach and sweating profusely with fever, but he managed to he make it through the entire program with full energy before collapsing in a heap in the dressing room. The Ambassador attended the show and graciously addressed the full cast afterwards. His statement that, “cultural cooperation is the best cooperation possible”, and his warm, personal handshaking and congratulations afterwards made for the perfect cap on the evening and on the Algerian portion of the companies tour. 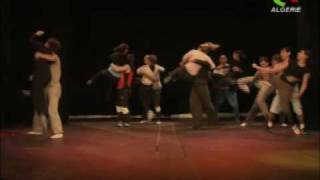