Adaptability: We had to reconfigure and downgrade our China program from what had been envisioned as a full company tour to a two-person program due to lack of funding. However, the results proved valuable and we were grateful to have had the opportunity to touch the lives of 50 youth in Beijing and Liuzhou.

Beijing – Marketing: we were disappointed in the lack of audience for the final performance. We only realized too late that neither the U.S. Embassy nor the host institution has taken responsibility for promoting the performance and as a result, the small theater was only half full.

Beijing – We took too much for granted in terms of building rapport and understanding with our professional counterparts; Whereas we insist on voluntary participation by the students in Dancing to Connect programs, the same should be true, even more so, with teacher trainees. Communication was strained at times due to language and cultural barriers.

Translation – interpretation – When working in a country such as China where English fluency cannot be taken for granted, it is critically important to have translators and/or interpreters who feel in harmony with the program and are familiar with dance and its special language. Also, having the same translator throughout a program is an important support. Changing on a daily basis is a struggle.

Liuzhou – adaptability – the students had to be in school for many hours a day; so our work had to fit into a time slot in the afternoon, after morning classes and before evening classes. We were worried about the students’ ability to concentrate on our program; but they proved up to the challenge.

Performance venue – Our only choice of venue for the final performance was a gym without any technical support because there were no stages available. We accepted conditions as they were. Even so, the Mayor and officials from City Hall attended and clearly the student participants were proud of their achievement.

Battery Dance Company initiated a cultural education and exchange program that took place in China in December, 2010. The program grew out of a relationship and on-going discussions between BDC Artistic Director Jonathan Hollander, Willy Tsao and Sarabeth Berman. Willy founded the Beijing LDTX dance company (as well as several others in China); Sarabeth was a Luce Fellow in China, had studied dance and urban studies at Barnard; and joined forces with Willy for three years, helping to manage the dance company and co-creating an international contemporary dance festival in Beijing where BDC had made its China debut in 2008. The three came together again in 2009 at the Aspen Institute’s Global Forum in Spain, where Hollander chaired a panel on Dance Diplomacy and invited Tsao and Berman to participate. This is where the plan was hatched to bring BDC’s Dancing to Connect to China.

After a year of planning, funding was acquired from the Henry Luce Foundation and a team was assembled by Hollander and Berman, integrating the efforts of two Battery Dance Company teaching artists, four LDTX teacher trainees and the staff of CAI (an NGO that worked with schools catering to Migrant Worker youth). Later, when Alison Friedman of Ping Pong Productions took over the local reins from Berman, Liuzhou was added to the schedule with two personnel from Guangzhou and a grant from the US Consulate in Guangzhou. The project had two goals: 1) to create an opportunity for disadvantaged Chinese youth to engage in the Dancing to Connect program with visiting American artists and 2) to train Chinese dancers and dance teachers in the skills of working with students with limited prior dance experience.

BEIJING: Two different groups of students from Xiwang Zhixing School, one of Beijing’s schools for Migrant Workers’ children, took part in Dancing to Connect workshops (one in the morning and one in the afternoon, as the only suitable room for the workshop had to be shared.). Four professional dancers, veterans of the LDTX Company, were chosen to participate as teacher trainees. They observed at first and gradually took over the leadership role, mentored and guided by Tadej Brdnik and Carmen Nicole, BDC’s veteran teaching artists.

The program produced remarkable results though there were various hurdles, small and large, that had to be overcome:

Unfortunately, despite extensive advance preparation and communication, it became clear that there were different expectations on both sides. Despite having been alerted in advance that they would need to be present for each and every hour of the orientation and training sessions, one of the translators and one of the LDTX teaching artists were unable to meet for debriefing sessions after each workshop day to discuss and plan for the next day. Having the translator absent made it difficult to communicate with the one remaining teaching artist and resulted in canceling the afternoon of meetings on that first day. Additionally, there was no experienced managerial presence coordinating the program. The local organizers had obligations out of China during the length of the workshop and the LDTX studio administrators had offered to take over this role, but they proved unequipped to do so.

Throughout the week, the program progressed and the smiles of the youths showed their joy and excitement, helping to counteract the tensions that were building on the administrative and pedagogical sides.

Entrance and exit surveys offer some insights into the participants’ expectations, perceptions and results. The data shows an overwhelming interest by the students in future participation in another dance program, as well as an increased interest in learning about the arts and improved body image. One particularly touching development was with an autistic boy who did not make eye contact and was too afraid to show his work in front of the group by himself. When the group was given the task to create a “name solo” by spelling out the Chinese characters of their names with their bodies, this boy was completely overwhelmed. After coaching and working on the task together with Carmen and the translator Jyingi, he not only performed his solo, he also laughed and integrated with the group for the rest of the day.

The final performance offered an opportunity for the participants to showcase their hard work. The students had had scant prior opportunities to experience art or attend a performance, much less participate in a presentation of something they had made themselves. The circumstances of their families’ struggles meant that very few parents were available to attend the final performance. Neither the U.S. Embassy nor LDTX promoted the event, resulting in a very low turn out to support the week’s work by the children.

Fortunately, there were many photographers present throughout the workshop and photo books were given to each child as a souvenir as well as costume T-shirts. Additionally, certificates of completion were awarded to each child.

LIUZHOU: After completing the Beijing leg of the tour, Tadej returned to the U.S. while Carmen traveled to Liuzhou where an add-on program had been arranged by Alison Friedman through her regional contacts and enthusiasm for spreading dance exchange beyond the capital. The U.S. Consulate in Guangzhou made a grant to support the program and identified Liuzhou Nationalities High School as the local partner. The high school was ethnically and economically diverse. Some students commute and others live on the school grounds. The schedule for Chinese students in a typical high school is grueling with classes beginning at 8 am and extending well into the evening. Despite their very full schedule, the participants and teachers were energetic and fully committed to the Dancing to Connect workshop. There were no problems with the program preparation nor the accommodationsth and students had different interests and concerns then the children from Beijing. They were older and working to perform well in school with the hopes of attending a competitive university program. Some of them had previous exposure to traditional Chinese dance. Their pride in the landscape and local culture was inescapable and became the theme for the piece made during the Dancing to Connect workshop. The students developed movement phrases inspired by nature, the elements and Chinese symbols found in local arts and crafts. Karmen Li from Guangdong Modern Dance assisted administratively and within the classroom as an interpreter. Her enthusiasm and focus was invaluable. She also involved a local modern dancer and beginning teacher Fung-Pu Xing to accompany her as an assistant in the studio and as a performer for the final project. It was lovely to have him as part of the program and he expressed interest in learning to teach the program in the future.

The Consulate staff arrived the evening before the final performance and in addition to assisting with the final performance, led a presentation about soft diplomacy and educational outreach for the Liuzhou teachers. The workshop was a great success and the performance was attended by an overflow audience which appeared to be the entire student body of the school. VIP attendees included the mayor of Liuzhou, the school’s principle and several other city officials as well as the Consulate officers. Although it all transpired without a formal theater or special lighting, it was a wonderful event and resulted in loud applause and school support. The participants received certificates of completion and gave Carmen, Karmen and Fung Pu a special farewell gift of photos and individualized messages in English. Goodbyes were difficult with many tears, hugs and hopes for another Dancing to Connect project in the future. A final dinner with the Mayor to celebrate the program’s success was a lovely close to a wonderful stay in Liuzhou. Similar to the Beijing survey results, Liuzhou students also showed a marked improvement in body image, a unanimous desire to work with Americans in the future and desire to participate in Dancing to Connect again. 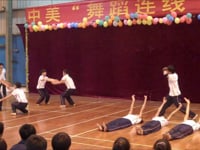