Even though the company had an English, Lingala and French speaking translator for their trip to Kinshasa, things were still being lost in translation. For instance, when rehearsals began with The National Ballet of Congo, there were communication problems. Despite the best efforts of the tri-lingual translator, misunderstandings emerged. It was even more difficult to integrate drummers into the rehearsal process. The musicians played from visual cues or by ear and intuition rather then a set tempo and rhythm. Drilling them in a rehearsal process to remember narrative cues and repeat music consistently proved very difficult. It gradually became clear that many of the dancers and musicians were unable to read or write, despite the fact that they could speak many different languages. Such communication problems slowed down the choreographic process between Battery Dance Company's Cultural Envoy, Carmen Nicole Smith, and The National Ballet of Congo.

Infrastructure, especially for the arts and education, is lacking in the DRC. People learn to make do with what would be considered impossible conditions elsewhere. The locals' ability to overcome such severe challenges earned our respect over and over again.

As is true in many parts of the world, there is a perception in the DRC that everyone is rich in the U.S. It was difficult but essential to explain to the local dancers that Arts funding in the U.S. is extremely modest and uncertain - and that the life style of the average dancer is marginal at best.

Following on the success of its 6-day Congolese program by a team of four in October 2011, Battery Dance Company was invited to nominate one of its members for a one-month assignment to return to Kinshasa through a U.S. Department of State program called the Cultural Envoy program. (This program has since been combined with the Performing Arts Initiative Program and both fall under the rubric of Arts Envoy Program.)

The first week of the program was filled with meetings and performances which, on top of her earlier experience in Kinshasa, provided a foundation to support her creative ideas and move forward in designing the program for the following three weeks.

The Cultural Envoy program was initially planned to involve the creation of one piece in partnership with the National Ballet of Congo. While this was entirely possible, there was no way that a work of sufficient length to fill an entire evening could be created in such a short time. In order to flesh out the program, the company discussed auditioning pieces by local artists and to curate the evening choosing who and what would be included. However, In the spirit of exchange and as a returning artist (with many alumni interested in participating), Carmen was hesitant to serve as judge and instead, chose to work collaboratively with various groups instead. Thus Carmen worked with local dancers to create a suite of three shorter pieces around the theme of gender inequality. The format of this work was in the style of the Dancing to Connect model from Battery Dance Company. This proved to be an enormous amount of work. In addition to the works created and performed by the Congolese dancers, Carmen developed solo material for herself in collaboration with local singers, a poet and a rapper all within the social message of cultural exchange, HIV/AIDS and gender inequality.

Fredericke Ngandu, Director of The National Ballet of Congo, was a joy to work with. He and Carmen developed an easy rapport. Among other things, he was able to help Carmen encourage the dancers to move outside of their usual vocabulary and to develop their own abstract movements to convey their story. His willingness to explore new and different ways of working took the pressure off of Carmen to fit her means into strictly traditional forms. Together, they met somewhere in between the Congolese and Western cultures to bring about a creative process introducing new ideas while maintaining the integrity and characteristics of the local traditions.

The National Ballet became the Carmen's home base -- she was given permission to use the venue for for rehearsals with the Dancing to Connect dancers as well as for the National Ballet. Fredericke's staff created costumes to specification and his technical crew supported the entire show. They were entirely professional and did a beautiful job of lighting design.

When necessary, additional rehearsals took place at the National Zoo and College Boboto. Electricity in these spaces was unreliable and sometimes meant working in the dark. Even being use to spartan conditions, Carmen found the state of ill repair of the facilities in Kinshasa to be heart-breaking.

When over 70 youth appeared to audition for the project, Carmen was faced with a decision. She was loathe to reject a large number and decided to utilize the "Dancing to Connect" methodology that is common to Battery Dance Company's approach and that could accommodate a large number of performers. She was assured by local partners that there would be a significant drop-out rate due to scheduling issues and lack of compensation. It was unclear whether the Embassy's budget would spread far enough to cover honoraria for the local dancers and this uncertainty contributed to attrition. In the end, 33 local dancers signed on to the project. From that group, three subsets were created based on schedule availability. With three groups to work with, the idea of the three epochs of the Congolese Woman was born.

The level of dance in Congo, despite lack of resources and training, is extremely high. The keen curiosity of the participants, their innate talent and hunger for opportunity were all factors in the success of the program. They were provided with meals and participation certificates; and as things turned out, funds were adequate to pay them all quite well which was well deserved.

One of the local hosts (Pam) created a partnership of support with a local shelter run by an Italian Brother in Congo. It was an introduction for what BDC hopes can become a future program. This shelter houses street kids or “shay gays” as they are called, orphans, child prostitutes and child soldiers. Brother Mauro gives overnight, extended shelter including education, meals and job training as well as an open center for those kids that prefer to remain on the streets but need a temporary refuge. On the visit, about a twenty-minute drive into a very dangerous area of outer Kinshasa, the company saw both parts of the facility but interacted with the children from the temporary care center. The kids, ranging in ages from seven to sixteen, organized a performance for us in the one language that is such a part of their culture, the language of dance. The company were desperate to try and organize a Dancing to Connect for them. Brother Mauro tirelessly provides support on all levels and even seeks out the families of cast-a-ways. He gives financial support, business training and family counseling, sometimes following a family for over two years until a child is safely reintegrated. It is endless work and he touched the company deeply with his energy and commitment. The girls, upon completion of their show, tried to teach the company some of their dance steps. They did not realize that the company too spoke their language of dance and when they answered their call, executing the steps. The children jumped up and down in excitement.

The final week and performance went relatively smoothly with the exception of a few issues. One was the performance venue and BDC's schedule day of rehearsals with all the performers. The company found out on the Monday before the performance that the daytime hours at the Halle were not possible. This was after having completed rehearsals for that day and communicating it to the Dancing to Connect groups. BDC could only be there using the space that Thursday evening for about four hours. To space and tech a ninety minute show in four hours is unheard of. Of course it all worked out in the end with some extra planning and efficiency. Again, an enormous “hats off” goes to the technical crew of the National Ballet and the Halle de la Gombe for their professionalism in making the show happen. The company were so proud of all of their dancers who arrived on time for the rehearsal on stage. It is typical for people to be anywhere from thirty minutes to two hours late in Kinshasa. The dedicated group made a commitment even with unreliable transportation, to be on time. Aside from these issues, the performance itself was incredible.

The passion of the Congolese and their dedication to the project came through vividly for the final event. The program booklet included two paintings by local artists depicting Congolese women in some way with their hopes and struggles. The painters were finalists in the State Department sponsored contest. Sandy Francis and Nathalie Marini sang beautifully in songs that united Congolese and American traditions. The audience joined in and it was quite a rousing way to start the show. The National Ballet took it to a whole new level doing what they do best, conveying theatrical dance. At the pinnacle moment in the story where the woman chooses to share the fish with her male partner, the audience clapped and exclaimed out loud. The company was jumping up and down in the wings! The Dancing to Connect dancers performed all three pieces perfectly with more energy than ever before. Finally, Elfia recited a perfect poem describing a hope and call for social equality among the sexes and Lexxus talked about HIV/AIDS, closing the show with his artful rapping skills. BDC's Carmen, also received enthusiasm and support from the gracious audience with her two solo performances.

By working together with the National Ballet of Congo and local youth, BDC discussed ways of showing the role of women in the past, present and perhaps the future. It was a learning process to discover how it could be done with movement and dance. The message was carried forth in the performance and in the process. As dance artists, the company explored new territory in movement creation derived from a narrative and completely driven by a social message. This month of collaboration enriched BDC's work in so many ways. 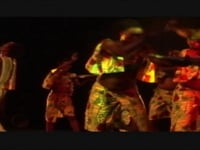