If you are visiting Durban, remember to bring your swimming gear. Even though it might be wintery in other parts of South Africa at the time of your visit, Durban is always tropical!

Security is a big issue in all of South Africa. No walking around on your own or with your cell phone out and you must use pre-approved taxi services. Be wary when out at night; always travel in pairs or, even better, groups and with someone local who can help you navigate.

Time is a loose concept in South Africa in general. Depending upon the city and the particular group, you may have to be flexible about start times.

We found that transportation for locals can be difficult in Cape Town. People travel in mini-buses and the operators can be very territorial. This can create conflict for people traveling from one town to the next.

In order to avoid being lost, directions and logistics benefit from meticulous planning. We had people lost on a University campus having trouble finding the dance studio. If your program requires moving local people out of their neighborhood to a separate venue, plan ahead and insure that someone who knows the way accompanies the group.

Schools have very rigid schedules in South Africa. If your program involves students, be sure to consult with school officials while planning the program. We flip-flopped our itinerary last minute in order to place the Cape Town during school vacation time.

The Cape Town leg of Battery Dance Company’s tour was most notable for the phenomenal relationship that was established with iKapa Dance Theatre. The two companies share a similar mission, combining the pursuit of artistic excellence and creativity with the sharing of dance education with communities in need. After a mere five years, iKapa has built a superb track record of achievement and recognition, creating a powerful model of community engagement throughout the Cape Flats area while simultaneously operating a professional company, an apprentice company, and serving as a reliable partner with international Consulates and arts organizations in Cape Town. We commend the US Consulate in having the foresight to bring us together with iKapa, and anticipate that the relationship will be an enduring one. Perhaps because it was the last stop on the BDC tour, and word-of-mouth had been building after the successes in Durban and the Gauteng, the media caught up with BDC in a big way in Cape Town with prominent news articles, feature appearances on television and radio interviews.

Our program began with an orientation meeting in a round-table format. All members of both companies introduced themselves and paired up into teams with two or three members of iKapa (dancers, teachers and apprentices) matched with each of the five BDC teaching artists. These teams would fan out over the next four days to the former townships of the Cape Flats district while one team stayed behind in the Woodstock neighborhood of Cape Town where iKapa had its primary studios.

The Company members were struck by the extreme socio-economic gap between the Waterfront area, where their hotel was located, and the Cape Flats communities where the Dancing to Connect workshops took place. Remnants of the Apartheid system were overt. iKapa should be commended for having found a way to bridge the gap, bringing people together across these seemingly insurmountable divisions. One of the youngest groups we’ve ever worked with was at an elementary school in Belhar. Initially resistant to concentrating and retaining their creations from moment to moment, this group defied the imagination when it came time to perform their work.

While in Kenya on an ARS Bureau-organized Battery Dance Company tour in 2010, Jonathan Hollander had been introduced to Nancy Onyango, a talented arts administrator, by the US Embassy. Nancy turned up in Cape Town this year, as Communications and Marketing Manager for the Arterial Network. Through her, meetings were arranged with other members of the Arterial Network national office in Cape Town. 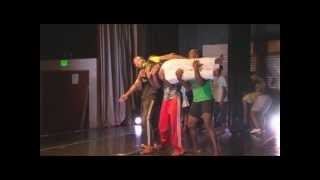