The second phase of Battery Dance Company’s two-part program in Malaysia was built exponentially on the plans, relationships and intellectual property-sharing put in place during the first phase that had taken place eight months earlier.

In January, 2011, Jonathan Hollander and two Battery Dance Company teaching artists, Sean Scantlebury and Robin Cantrell, had established close rapport with two partner organizations in Kuala Lumpur, Sutra Dance Theatre and ASWARA, that were to become central to the projects culmination in September.

At ASWARA, Malaysia’s National Arts Conservatory, the American team had exposed students and faculty to the methodologies of Dancing to Connect (DtC) through a dual-layered approach:

Sean, Robin & Jonathan worked with 40+ ASWARA students in two groups, providing them with the guidance needed to create their own choreography following the Dancing to Connect model

The Battery Dance Company team selected a group of the most motivated ASWARA students and invited them to shadow the Dancing to Connect workshop program with 20 youngsters from the refugee community of KL, under the auspices of the UNHCR. Having implanted an understanding of DtC and created trust and mutual respect with its Malaysian partners, BDC was able to move on to the next step. With the guidance and cooperation ASWARA’s Dean of Dance, Joseph Gonzales, five senior dance majors and recent graduates were selected to serve as teacher trainees with the five teaching artists of Battery Dance Company.

Local Malaysian partners in Kuala Lumpur offered their support in the tasks involved in organizing five separate cohorts of 20 students each to take part in DtC workshops and final performances. A list of partners is appended to this report. An emphasis was placed on reaching out to under-served communities including refugees, students at government schools, street children, orphans and so forth. Venues were located for each workshop – with the requisites of wooden floors, good ventilation, sound equipment and spacious dimensions. As the planning phase unfolded (between February and September), more and more people and groups gravitated to the program, expanding its outreach and scope many fold.

Upon arriving in KL, the 7-member BDC team held meetings with the ASWARA trainees in preparation for the teamwork that would take place a week later. Subsequent attention was turned to the realization of the other pivotal 4 performances in collaboration with Malaysia’s leading dance company, Sutra Dance Theatre.

This series of performances, which attracted audiences of approximately 2,000 as well as major television, radio and print media coverage, involved performances of repertory pieces by each company. Taking full advantage of the opportunity to collaborate artistically, two works were created and presented in which dancers from each company worked with the choreographer of the other.

Into the Centre was a new work that Jonathan Hollander choreographed for the Sutra dancers which was set in January, rehearsed again in August when the dancers were in New York for Battery Dance Company’s Downtown Dance Festival, and then given a final polish in September when Hollander arrived in KL. Sutra Dance Theatre’s artistic director Ramli Ibrahim set his version of the classic L’Apres Midi d’un Faune (r.) on BDC’s Sean Scantlebury and 5 dancers from his own company. Both works earned sustained applause from the Malaysian audiences though response from the press was mixed.

The series of performances was interspersed with other activities – such as Hollander’s keynote address on the topic of ‘Hybridity in Dance’ which was delivered before the Asia Pacific International Dance Conference that took place in KL simultaneously with BDC’s visit. Barry Steele gave two lighting workshops that were extremely well-received by the local community of designers and technicians. The three-week MyDance Festival was also taking place during BDC’s visit, providing Robin Cantrell a platform for presenting her video-dance work, and additional press coverage. India’s leading dance critic, Dr. Sunil Kothari, called Into the Centre “the highlight of the MyDance Festival”. Once these events were completed, the Company’s concentration turned to its Dancing to Connect youth outreach activities. With supervision and design by Hollander, the 5 dancer/teaching artists of Battery Dance Company paired up with their ASWARA trainees and led 5-day intensive workshops for 100 Malaysian students from extremely diverse backgrounds. In KL, groups comprising 8 students from the Mont’ Kiara International School (which donated its theater and gymnasium for the training sessions, and its stage for the final performance) were combined with 52 students from Harvest Centre, KrashPad and Ti Ratana Welfare Society – teens whose refugee, orphan or otherwise disadvantaged status contrasted strongly with their peers from the international school.

Another group set up camp at Rimbun Dahan, a remote artists’ retreat donated by the family of Bilqis Hijjas, Director of the MyDance Festival. These students came from a nearby Malay Government school with extremely Spartan facilities and program offerings. Working in the tranquil and beautifully appointed dance studio at Rimbun Dahan with the nurturing support of BDC dancer Bafana Matea and ASWARA’s Murni Omar was an experience that I doubt any of the students will ever forget. This group traveled into KL on the day of the performance to share the stage with the other two groups at MKIS. The results were magical. 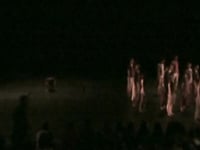