In the lead-up to the Indonesia program, BDC and the U.S. Embassy came up with a plan that was inspirational in terms of outreach -- to have each of the 5 teaching artists in the company fan out to 5 different Indonesian cities to conduct Dancing to Connect workshops in each region of the enormous country. However, as time went on and we began to identify the logistical challenges of such a wide-spread program (and staffing challenges on the part of the Embassy), another, plan was devised that, compared to the original one, seemed disappointingly conservative and limited. However, in the execution of the project (with a huge performance and two seminars in the capital, Jakarta, followed by a full-on Dancing to Connect program in a provincial city, Makassar, that had never seen anything of the kind before, it proved not only seriously challenging but also profoundly meaningful and full of impact. In retrospect, we found ourselves grateful not to have proceeded with the original plan which would have stretched us all past our limits.

Having attempted to build Indonesia into its Asian itineraries for several years, Battery Dance Company was thrilled to have the opportunity to work with the U.S. Embassy, designing a program that started with a high-visibility performance and two subsidiary programs in Jakarta, the nation’s capital, and continued with an intensive series of interactions in the provincial capital of Makassar, a maritime city of 1.5 million people. Ramli Ibrahim, the great choreographer and dancer based in Kuala Lumpur, Malaysia, helped BDC establish contact with two of Indonesia’s leading dance entrepreneurs. By connecting these local contacts with the U.S. Embassy, the shape and dimension of BDC’s program was developed in a way that satisfied everyone’s desire to make the most of the Company’s time and talents.

To start things off, BDC had the honor of performing at the Teater Jakarta, Indonesia’s most modernized theater and part of the Jakarta Art and Cultural Center, Taman Ismail Marzuki, with an audience notable for the range of ages from young students to senior citizens. U.S. Ambassador Scott Marciel gave a welcoming speech and introduced Battery Dance to a full house of over a 1,000 people. The Company performed, Autobiographica, a new work choreographed by the five company members, and Layapriya, a revival with Indian and modern Western components. A leading Indonesian newspaper Kompas declared of the performance “It was a presentation of flawless techniques and prime stamina of its dancers, as well as a show of music, multimedia and lighting that were nicely done.”

On the second day in Indonesia, five Battery Dance teaching artists traveled to Makassar, while Jonathan Hollander and Barry Steele remained in Jakarta to conduct seminars on fundraising and lighting/production respectively. The dancers were divided and given different assignments for the week. Two dancers visited government schools each morning and engaged in media interviews during the afternoon. The other three ran Dancing to Connect workshops that lasted for four days, simultaneously training local teachers so they could lead their own DtC workshops in the future.

The program culminated in a final performance held at the Gedung Mulu, a historic Dutch community hall, transformed into a dance theater through the skilled and imaginative exertions of Barry Steele and his local counterpart, Andi Muhammad Redo, executive director of Yayasan Kesenian Batara Gowa. Jonathan led a talk on Fundraising and Arts Management for Rumata, a house for art and cultural interaction that had just been inaugurated in Makassar. Jonathan also addressed the local Ministry of Tourism and Culture on the role the Arts can play in civic development. A follow-up meeting with the Minister provided the opportunity to converse on how best the city of Makassar could support its budding local arts community. Battery Dance’s Indonesia trip, the final leg of BDC’s 2011 Southeast Asia Tour, left the Company hoping for more such opportunities in the future.

See the narrative for Jakarta, Indonesia 2011 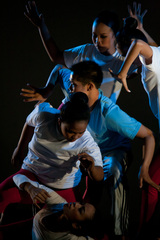