Battery Dance Company’s teaching artists worked with 60 students – from Israel, West Bank and Germany -- in two series of workshops earlier this year. Using the universal language of dance, these students of 16 – 18 years old built teams that crossed religious, social and geographic boundaries. Together, they created choreography that spoke to the issues of inclusion and exclusion. As the process went forward, the differences between the students melted away.

The first session of 5 days took place in the working-class city of Bochum in the German State of North Rhine Westphalia (for more on the Bochum program, see Bochum, Germany). The students from Israel and the West Bank had flown to Germany a few days earlier and had toured Berlin before coming to Bochum.

Over the course of the next several days, they worked with Battery Dance Company teaching artists and were introduced to the craft of choreography. Given the fact that only a few of the students had taken formal dance classes in the past, everyone was on a similar level – they knew very little about the medium of dance and choreography. The professional teaching artists coaxed the students into creating movement by giving them a variety tasks that built from individual creative movement phrases into group choreography. The workshops completed, the students took part in a grand performance in the auditorium of the Pestalozzi Realschule, attended by dignitaries from the state government, U.S. Consul General and German recording artist Peter Maffay whose foundation, Encounters, provided support for the project.

During the second session, the migration was reversed: the German students traveled to Israel, stayed in Jerusalem and commuted each day to Kfar Menachem, a rural town to the South West. The students were accompanied by representatives of the Peres Center for Peace and of Encounters (Germany) as well as Jonathan Hollander, and two BDC teaching artists. Each day, they worked at the Savit Regional High School with its excellent facilities, once again using the language of dance to build teams and trust. A performance was held at the high school, attended by Israeli and Palestinian families, government officials and community members. The emotion was palpable on the part of the students as well as the families who saw something they never would have believed possible – young people of three societies between which historical events have created seemingly impenetrable barriers working physically and artistically towards a unified goal.

"As Project Manager at the Peres Center for Peace, I have seen a lot of projects with teenagers. But this time is special. It is so hard for youngsters at the age of 16 or 17 to express themselves in words or in other ways and the work of the (dance) company made them all connect and express themselves in a way that I think amazed every one of the adults involved. You have to remember that Israeli and Palestinian kids are unable to connect with each other in everyday life; they are coming to the meeting with each other with a lot of stereotypes and a lot of misconceptions and to see them dancing together and creating something that is joint project -- they are realizing that they are all teenagers and human beings first and foremost" ~Libby Lahar, Project Manager, Peres Center for Peace

"I had the great chance to see and to feel what happens between the students (in the Dancing to Connect project.) First they were alone and didn’t touch each other and had problems based on their identities as German, Israeli and Palestinians; but then they began to be open, to open their hearts and to realize that each one’s contribution is important to the group; “I am part of the group; and if I am to succeed, then everyone must succeed.” ~Silvia Zens, Headmistress, Pestalozzi Realschule, Bochum

Some of our dancers encountered a political edge in their interactions with the college-aged Israeli students at the Seminar Hakkibutzim, once they learned that we had just come from programs in Jordan. The tensions between the Arab and Israelis is obviously very close to the surface and even a casual reference to Jordan can lead to controversy.

On the other hand, our work at the Arab-Jewish Community Center in Jaffa, with younger students mixed between Jews and Muslims, was completely devoid of tensions. The individuals in the mixed classes were indistinguishable in terms of ethnic/religious background and they worked very well together.

This program prepared us for what was to be a second program in Israel, 6 years later, in which we worked with Israeli, Palestinian and German youth in mixed groups.

Israel has a very advanced system of arts education, quite extraordinary for a country of its small size and population. Both our dancers and musicians enjoyed the interactions immensely with such a well-prepared, curious and talented group of students.

The most challenging aspect of our program in Israel was the pre-tour stage. The Embassy didn’t begin the process of securing a theater until a couple of months before the tour. This was far too late given Israel’s high track dance scene. Fortunately, at the last minute, the FSN in Tel Aviv found Ennis Auditorium in Jaffa. This proved to be a boon – because the location allowed for the primarily Arab population of Jaffa as well as the Israelis to attend the performance, which was packed to the rafters.

Participants and instructors both offered interesting and insightful comments.

Steven Novakovich at the Neve Eliezer Community Center in Tel Aviv: “This was a wonderful, art thriving, small local community center which is dedicated to providing the necessary art training for the youth in its area”.

Mark Ferber at the workshop at the Levin School of Music, Tel Aviv-Jaffa. “This turned out to be a concert for the students at the school; it went very well with the students being very attentive and appreciative”.

Bafana Solomon Matea taught an Ethiopian dance company at the University of Haifa. “The company consisted of both men and women, in practically equal numbers. Jane Sato and I taught them a modern dance class, accompanied by our percussionist Mark Ferber”.

Improvisation and calm in the face of last-minute schedule changes are valuable tools when touring! BDC’s teaching artists suspend judgment and usually offer more, not less, when on tour. The value of such an attitude was made clear when three of us hustled off to Petach Tikva, outside Tel Aviv, to teach back-to-back master classes. Our hearts warmed at the talent and high technical level of these teenagers whose passion for dance was immediately evident.

Sean Scantlebury taught two hip-hop classes and John Byrne taught two modern classes, with the same students, divided into two groups of 25, switching places so that each one was able to take each type of class. The energy was palpable and the level of skill and diligence were immediately apparent. We enjoyed meeting Sarit and Sasi Avizoor, proprietors of the studio and talked about cooperation in the future. 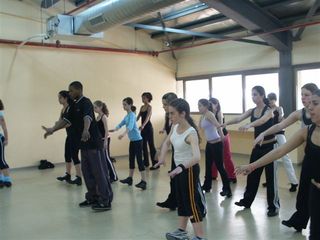 Several of us drove to Haifa from Tel Aviv to meet Dr. Ruth Eshel and a troupe of Ethiopian Jews who had preserved their traditional dance form under her guidance. We spent several hours together, warming up and giving them a modern dance class followed by their giving us an introduction to their dance form, Eskesta, which is primarily a dance for the shoulders. After a few minutes, we began to feel muscles we had never used before (!) and all did a lot of laughing at how difficult it was for us to isolate the shoulders in such complex and exhausting ways.

It was a long drive in both directions but we felt enriched from the interaction.

A large number of the dancers returned the favor by coming all the way to Jaffa to see our performance a day or two later!